“When I first came to China it was supposed to be for 3 months, so I wasn’t worried about my son’s treatment. But when my husband was asked to stay, I knew that my son’s education had to be the priority. I started by going to the international schools and asking them what speech therapy they offered, and was continually told about ELG. So I visited the campus and met Monte, who showed me around. I immediately felt that this was a better service than we were getting in the US. My son started soon after, and we haven’t looked back.

Robin, the program leader, has made a personal difference to my son. He’s changed so much it’s been incredible; a complete turn around. He’s gone from not speaking at all to verbalizing what he wants. It’s as though his whole persona has woken up; he’s so much more in tune with his environment. The staff are professional and helpful, and so willing to communicate. The course covers everything, from speech therapy to helping him tie his shoes. The ratio of staff to children is fantastic, meaning that each child gets the attention they need.

He has, in a year, gone from speaking just five words to clearly expressing himself verbally. If he wants something he asks for it and he talks about his feelings. His repetitive behaviors have gone and he’s ready to transition back to a regular preschool. My husband, who was initially on the fence, now believes that this has been great for him. Honestly, coming to China is the best thing that could have happened to my son; he wouldn’t have got this level of care back in America.”

“My son spent a year in an international school that wasn’t right for him, and it made him miserable. Once the second year started we were told within a few weeks it wasn’t working. They tried their best but they ultimately just didn’t have the resources.  We visited the ELG campus and they suggested that he join the full time program.

The change has been remarkable.  He hated his previous school; every day his bottom lip would start to wobble as I left him. He was also hard to manage at home, never clearing up after himself. Now he’s so much more content. You can see it in everything from how eats his meals to the way he interacts with his siblings.  His brother thinks ELG is great for my son as “now he doesn’t kick me so much,” which I think is his way of saying that my son is much happier. His academic skills are improving too.

When my son started at ELG he didn’t really speak, but within eight weeks he was coming home and play acting out the goodbye circle that they do at the end of each day. He put bags in a ring, naming them after his classmates. Then he sang the bye-bye song. I’d never seen anything like it before.”

“While I was in Australia, I found out that my daughter was on the autism spectrum. It was a horrible thing. You instantly know that there’s going to be a big change coming to your relationship with your child and with your partner. My wife hadn’t been there for the analysis so she took a little longer to understand, which added further strain. Once my wife had come round to it we knew that we needed some intervention. Our first reaction was to look at the international schools that have some level of integrated speech therapy.  However, we saw the student/teacher ratio and knew we wanted something better. We looked online and found ELG. I think my daughter was a bit lonely and bored before starting here and it took her a while to acclimatize to a more stimulating day. After a while she started to make relationships with the other children. She used to blank everyone except for my wife and me, but now she looks and people and makes eye contact. It’s still nascent, but it’s growing. The staff have been so helpful. She really enjoys using the trampoline here, so we got one at home; she loves it. She’s been on three school trips and enjoyed each of them; these additional activities are really high value. There was a mental barrier to be overcome with entering a special school, but now my daughter is starting to deal with her communication problems and there may be a future where she can return to mainstream education.”

“I think we have created a very unique environment for the parents and children to learn to communicate, to interact with each other. In most of the world people go to the hospital, they see the doctor, they see the therapist, all individually. But here, the therapist and parents and teachers have a lot of time to interact with each other. In Taiwan in one week I had 100 clients I needed to see; here it is nearer 30-40. It’s amazing that we can create such a good environment. In Taiwan you don’t have time to talk to every child, talk to every parent. Not just about the difficulties they are facing but also about their home life. But here it is normal. You always have time to talk to the parents about all the issues. It’s really amazing, it’s almost impossible in other countries.

The integrated nature of the work means that if a child has fine motor difficulty and has speech difficulty as well, I can treat both simultaneously. We can incorporate speech into physical sessions; we can ask them to turn over the pages of a book. It’s like a combined intervention.” 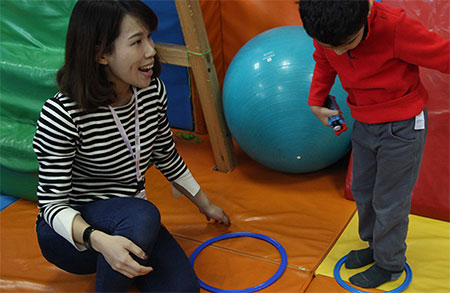 “The makeup of our full-time programs is unique, not just in China but anywhere, even the US. What is happening in America is that the therapists are present along with other staff. Kids are going to mainstream school and seeing therapists or the therapists are coming into the room, it’s not holistic. Here we are all talking all the time. Not just me talking to therapists but therapists talking to each other. There are all these things that happen on the fly, the little conversation in the hallway, or because I’m observing a session or they are observing me. They lead to teachable moments.

Teaching is most effective when you see the chance for an organic experience to develop, and you have the knowledge to try. That is why this place is great. Even if I don’t have the answer, people around me do. They can suggest things I can think about then model. The brain power in this building is mind boggling and the way it’s facilitated it is unique anywhere in the world.

When I saw all the different therapies, I just thought “Why isn’t every school doing this?” Not just for special education, but so much of this approach is effective for all children. I saw so much application of those kinds of learning. For a preschool teacher what you are really in need of are specific things that you can do to affect and change behavior, and this is a candy store. For me personally the growth was amazing.”